The Motivation to Work

How can you speak powerfully?

A powerful speech can sell refrigerators to an Eskimo! Speaking with power simply means being able to channel the listener’s mind in the direction that you want it to go. Powerful speaking involves storytelling; you should be able to speak in manner that triggers the listener’s imagination. It is normal to feel nervous when speaking in front of an audience. You must always remember that it is important to address people with respect. It is important to speak with power becaus

In the time of World War II somewhere in the UK, a man was crowned the new prime minister. As with many other politicians, some wished he never took over, some very much the contrary but one thing was clear: by the time he took over position, he was desperate to set the wheels in motion and get into action. Indeed, an action fanatic in his own right, he would give every subject his intense thought but would waste no time in unnecessary consultations. As a matter of principal

During his reign of terror, Adolf Hitler commissioned his personal architect, Albert Speer, to redesign the new Chancellery building. Within just a year, the grand building was completed. Its scale was reported to be one so massive that Hitler’s office itself was equivalent to the size of a tennis court –except that, mind you, that isn’t the best part. Due to that very massiveness, historians claimed that the journey from the main door to his desk alone became quite a walking

It doesn’t take a lot to hear what people honestly think about most politicians. Either they’re merely jesting around with you, or they are saying with conviction –politicians? All liars! Well I have news for you. It doesn’t take a long time to be in the design field to know that when it comes to manipulating, politicians are not alone in this, but designers too. Aha. Indeed, being in the creative field requires one to see things in various ways possible. Sometimes it require

In order for us to achieve our KPIs and organizational goals we must be able to mobilize and empower our workforce to do the right thing in the right way most efficiently. The workforce must get things done!! It's simple enough. This is an indisputable fact of the corporate world. Lets Move It We have seen and observed many organizations are going through re-org after re-org; months after months. Have you ever wondered how results are being achieved, when everyone is changing

Imagine this scenario: You walked into a room full of strangers who seem to be mingling and having a good time. Everybody but you seems to know each other, judging from the conversations rapidly thrown one after the other within every formed groups, as well as the roaring laughters at every sides of the corner –basically the whole scene. You begin to have second thoughts, now at complete lost and without an inkling on what to do next. But just as you were going to call it qui 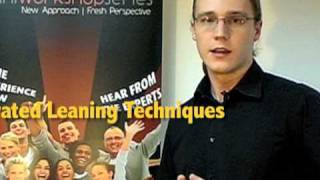 Starting as a Professional Trainer

Unlike doctors, lawyers, and several other professions, for most countries, there are no government-mandated requirements, credentials, or licensing for a person to start a training business and work as a business / corporate trainer. This does not mean that you don't need any credentials to succeed. You will be competing with other trainers so you will need to impress your clients with as much credentials as you can muster. These include your education, past accomplishments

How can you speak powerfully?

How to deal with difficult people